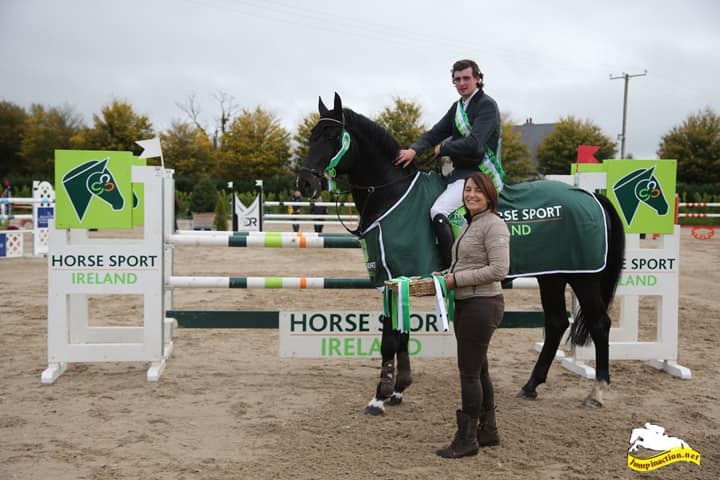 Posted at 09:18h in Uncategorized by Emer Bermingham
Share

Leinster riders were back in the ribbons again today as they claimed four of the top six placings in the HSI SJI €5,000 Autumn Grand Prix in Tipperary Equestrian. Wicklow rider Brendan Murphy landed the win when he partnered Gabriel Mullins’ Zambia to a clear in 37.33.Bred by Alan Robertson, Zambia is an eight-year-old gelding by Diamant De Semilly and is out of the Alba sired dam Sambia.Placed fourth in Barnadown the week before Kilkenny’s Eddie Moloney was back in the line-up, this time claiming the runner-up spot with Temple Alice, when he stopped the clock in a time of 37.82.Murphy also took home another share of the €5,000 prize fund when he slottied into third place with City LVM, when clear in the more conservative time of 43.39.Winner of the round in Barnadown the week before, Edward Doyle and Chacco Bay added to their points tally when they accounted for fourth place. The combination were last of the double clears in 51.21. Owned by Lisa Cawley, Chacco Bay is a nine-year-old gelding by Chacco Blue and out of the Cruising sired dam, Cruise Leaf.

In the six-year-old division, Derek Mcconnell led the victory lap with Sorcha Hennessy’s Inlaws Manolo, when they were the fastest of the 11 double clears in time of 19.67. This combination also took the win in the round at Killossery.Fellow Kildare rider Nicola FitzGibbon took the runner-up spot with Michael Kenny’s Castlebridge Metro Du Carel (ISH), when they stopped the clock in 20.06, ahead of Kilkenny rider Robin Carey who crossed the line in 20.99 aboard Luicruz in 20.99.