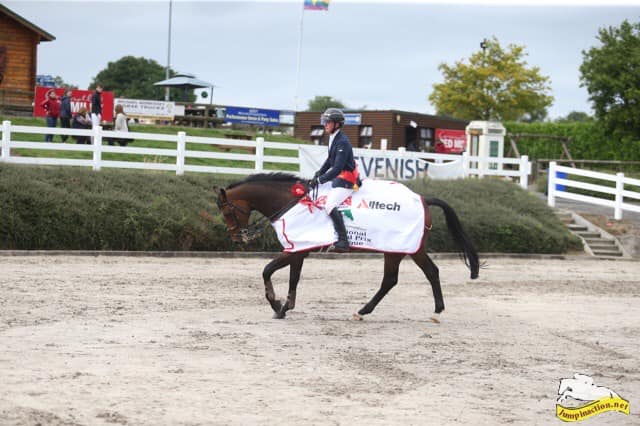 Posted at 22:20h in Uncategorized by Emer Bermingham
Share

Athlone’s Francis Derwin has moved up to third place in the GAIN Alltech leader board, after he took the win in the round at Mullingar Equestrian today (31st July). Riding Deep pockets he cliched victory when he delivered a double clear in 34.56 seconds. This is the third win in the league for this partnership, having won in Portmore and in Cork. Owned by Francis’ uncle Jim Derwin, and bred by Charles Pidgeon in County Westmeath, Deep Pockets, is a 12-year-old gelding by O.B.O.S Quality 004 and out of Simply Chic (Cruising). Francis took over the ride from his sister Kate earlier this season and is proving to be very consistent.It was a very competitive class with 84 combinations battling it out for the €4,000 on offer. From the original starters, just five booked their place over the Alan Wade’s jump-off course. Time was clearly a factor, with seven combinations being denied a place a place in the second round due to time faults in the first round.Taking the runner-up spot was Kevin Gallagher and the eight-year-old Clark, when they also kept the poles up, albeit in more cautious time of 37.52. Owned by Julia Nagle, the German bred gelding is by Codex One and out of the dam, St Pr Hauptstutbuch Sassicaia.Tipperary’s Darragh Ryan was last of the double clears with Thebest of Dancer in 38.64. Owned by Vivienne Digby, the 11-year-old mare is by A Qyudam M and out of Madame Papillon.Young rider, Emma McEntee, but in a very fast round with MHS New York, clocking 35.14, but one pole on the ground saw them take fourth place in the line-up. McEntee, who had a great start to the season after being crowned the TRM Showjumpers Club Champion has continue to deliver results in the senior arena. MHS New York is owned by Miguel Bravo and was bred by Thomas Brennan. He is an eight-year-old gelding by Quidam Junior and out of the Cavalier Royale sired dam, Cavalier Kells.Adam Carey also proved out of luck, when he incurred four faults with Quinn Z, in a time of 39.79 for fifth place. Owned by Philip Carey, the nine-year-old mare is by Querly Elvis and out of the dam, Cherunique Z.Brendan Murphy was denied his place in the jump-off after incurring a single time fault with City (LVM), but he done enough to take sixth place on this occasion. Owned by Helen O’ Regan and John Hoyne, the nine-year-old, which was bred by Kein Zuchtbrand is by Cicero Z and out of the Contefine sired dam, Camousine Z. This combination have been on form, claiming fourth in the HIS Premier Series in Balmoral.