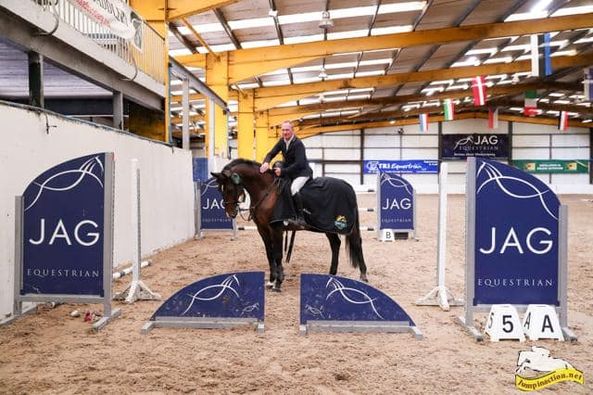 Posted at 11:55h in Uncategorized by Emer Bermingham
Share

Jag Equestrian was a hive of activity last Sunday as it played host to a round of the popular Mervue Equine Leinster Summer tour.

A familiar face in the tour, Paul Carberry took the win in the 1.35m division, when he was fastest of four double clears in 31.23 with his own Brandonview First Edition. Bred by Seamus Drea from Kilkenny, the 11-year-old gelding is by Douglas Cavalier out of the Balda Beau sired mare Brandonview Lady. National Grand Prix Champion, Derek McConnell also lodged a clear with the Izzy (KWPN) albeit in a slower time of 34.24 for second place. Owned by Sorcha Hennessy, Izzy is a KWPN eight-year-old mare by Special De Muze and out of Ulrieke. Eventer Cathal Daniels and Cappog Tomy added to their record when they delivered a clear in 38.91 for third place. The 10-year-old gelding was bred by Tommy Reilly and is by Camiro De Haar Z and out of Cornacassa Ferro.Francis Connors and the eight-year-old Erne Riverrun was last of the double clears in 41.19 four eventual fourth place. Owned and bred by Hugh Fitzpatrick, the eight-year-old gelding is by Antaeus and out of the Aldatus Z sired dam, Antaeus.         Grace McHugh had down with Berlios Van De Kapel, in 38.18 for fifth place. The 15-year-old gelding is by Quasimodo Z and out of Superior Van De Kapel. Stephen Murphy and Chantelle also incurred four faults, but in the slower time of 39.69 for sixth place.Bred by Gerry Traynor,the 12-year-old mare is by Lux Z out of the Errigal Flight sired dam, Texaco’s Delphine.

Leading the victory lap in the 1.20m Aoife Healion and Equita when they crossed the line with nothing to add in 27.57 seconds. Deirdre Doyle’s clear with BLM Authentic Diamond in 28.11 saw her take second place, ahead of Sean Kavanagh and Rosemary Reynolds owned Carousel Gold, who also crossed the line clear in 29.15. Sarah O’Donnell and tDiamond Infinity, took fourth place, when clear in 29.61. IAoife Healion took another place in the line-up, when she delivered another double clear with Global Guss DHI, in 29.82, while Paul Carberry’s clear with and Calcord, clear in 30.03 saw him take sixth place.

In the  1.10m section, amateur riders featured strongly in the line-up, taking three of the top placings. Claiming victory on this occasion was Aileen McDermott took the win, when she delivered a clear with Amber Balou, in 22.55 seconds. Aoife Healion also answered all the questions with Patrick Kirwan owned Equita n 23.21 for second. Amateur rider Marie Hartley took the next two placings. Keeping all the in place with Nikita Van Het Heidenhof, in 26.65 for third place and fourth place with Scarthill Vendi when clear in 26.68. Young rider Rianna Magee accounted for fifth place with Castlebridge Pacquiao, clear in 26.77. Aoife Healion returned to take  another place in the line-up when she delivered another double clear with Global Guus DHI, in 27.52.