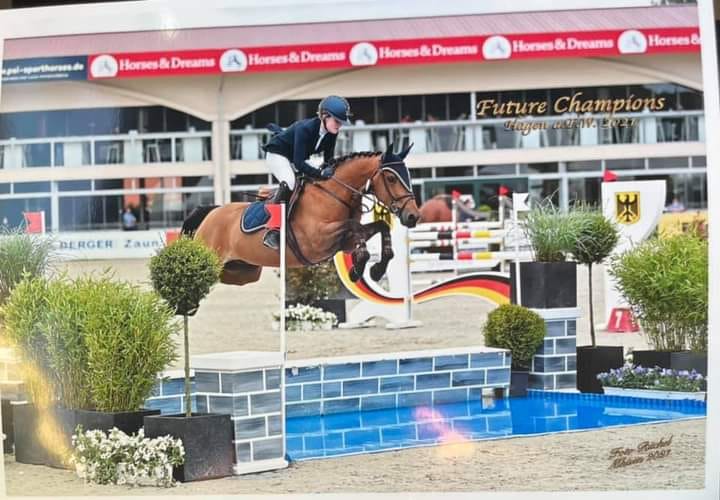 Posted at 10:23h in Uncategorized by Emer Bermingham
Share

It was a great week for Leinster riders on the European and International circuit.On Saturday, Caragh Charlton and Galina were part of the Irish U18 (Junior) team that took the win in the Nations Cup in Hagen Future Champions Nations Cup. Caragh Charlton and Galina, picked up a single time fault in the first round and was clear the second time out.

Later that evening the Irish U21 (Young Rider) team defied the odds in their Nations Cup to land a runner-up finish despite having only three team members and no discard score. Three Leinster riders were on this squad, Kilkenny’s Kayleigh Soden and Ard Leaderman Jason Foley and Clyde VA and Sean Monaghan with EMS Adelaide. On Sunday, the James Kernan Irish U14 (Children On Horses) took the silver medal. On that team was Emily Moloney with GVS Goodwins Queen and Chloe Hughes Kennedy with Zuidam.

On the pony team that finished third, three Leinster riders made up that squad, Eoin Brennan with GCS Daisy Lux (ISH), Marta Hughes-Bravo with Carrickaduff Pet (ISH), Chloe Hughes Kennedy with Still Got Me. Over the course of the week, the results kept rolling in. Marta Hughes-Bravo claimed the win in the 1.25m on Thursday aboard her Irish Sport Horse Mare HHSMustang Sally. Then on Friday, the combination took another win in the 1.25m, Emily Moloney and Castlehill Titan, also feature in this line-up . In the 1.45m, Jason Foley claimed eighth place aboard MHS Jersey Girl while on Saturday, Chloe Hughes Kennedy and the stallion Zuidam, took a sixth place finish in the CSIOCh Grand Prix 1.30m.

In Vidauban in France on Saturday, Wexford’s Patrick Hickey finished in third place in the CSI2* 1.45m. Riding GRS Lady Amaro.In Denmark, Mikey Pender began his week with a runner-up place in the 1.10m Medium Tour answering with the Marion Hughes owned HHS Fortune,On Sunday, he was back in the line-up, when he took third in the 1.50m Medium Tour final with HHS Fast Forward. .

Wexford’s Bertram Allen finished best of the Irish in the five-star Longines La Baule Grand Prix in France. Riding Harley VD Bisschop, Allen was one of just six combinations to make it into the jump-off and despite picking up four faults in the second round they still managed to finish fourth to collect €20,000.Kilkenny’s Willie Tynan, took second place in the 1.40m speed class with Fancy Girl and then took third place in the $37,000 Restylane 1.45m FEI Welcome, aboard Ballinteskin Joe.In the final $100,000 1.45m FEI Grand Prix, Kilkenny’s Richie Moloney was best of the Irish contingent, when he finished in seventh place with Coco Beach.