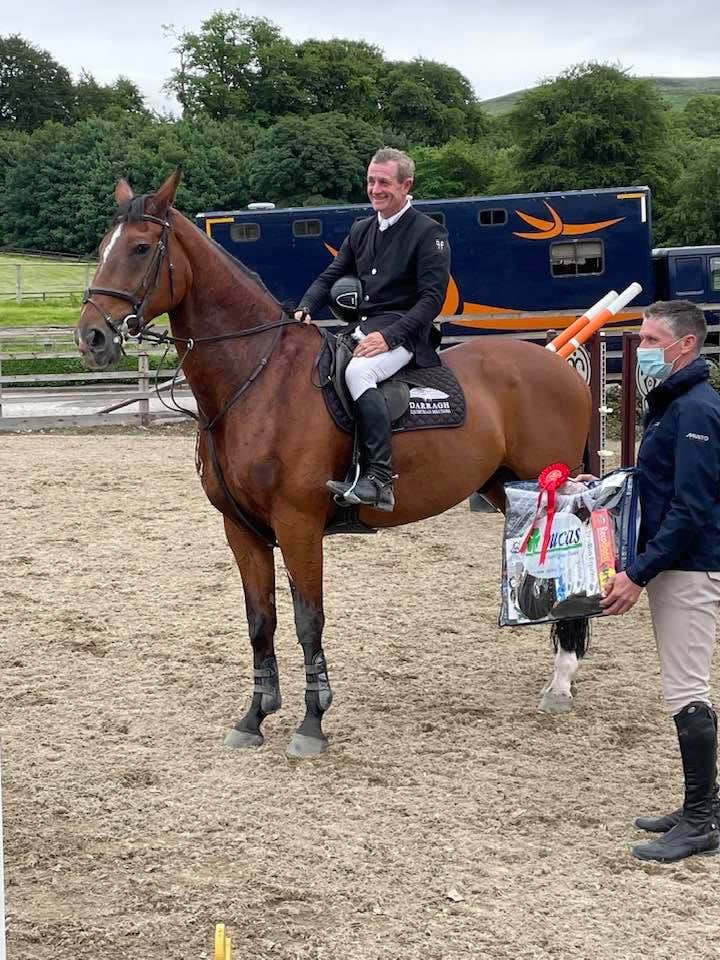 John Floody dominated the 1.35m Mervue Equine Leinster Summer Tour in Ravensdale, claiming three of the top placings. Floody took the win when he delivered a double clear in 31.62 with Ballyknock Diamond. Owned by Denyse Hughes, the 13-year-old gelding is by Jacomar and out of the Touchdown sired mare, Ballinlock.Floody also took second place for good measure, when he was fractions behind aboard Donevan Erkindale in 31.92.

Kildare’s Stephen Murphy and Chantelle left nothing to chance and they came home with nothing to add in 33.43. Dublin rider Savannah Marshall and her own Flambeau, opted for the longer routes and it paid dividends, as she crossed the line clear in 35.02. Slotting into fifth place was Rhys Williams and Cowboy Balou, when clear in 35.25. Floody completed the hat trick when he partnered Accidental Diamond to a clear in 35.70 seconds for sixth place.

1.10m
Kildare rider Juliana Soromenho took the honours in the 1.10m division, when she crossed the line with nothing to add with her own Leonardo Dondoctro in a time of 22.63 sections. There was nothing between the next placing as Aoife Healion and the Patrick Kirwin owned Equita galloped home in 22.65. Following on from a great show in Mullingar, Aileen Mc Dermot, slotted into third place when she delivered a clear with Amber Balou, in 22.78. Fellow amateur rider, Kevin O’ Reilly and Furore S took fourth place, when they kept all the poles in place in 24.43 seconds, ahead of Gavin Smith and Annaghmore Omard Balladee, in 25.09. Completing the top six line-up was Mary Mc Shane and MMS Loreal, clear in 25.65 seconds.

1.20m
County Down rider Kirsten Farr led the victory lap in the 1.20m division, when she came home clear in 26.24 seconds. Aoife Healion was back in the ribbons, claiming second again with the Patrick Kirwin owned Equita, celar in 27.19. Accounting for third place was Dermott Lennon and All Pleasure Hero 11 , clear in 29.96. Edward Little slotted into fourth place with the Kevin Byrne owned Drumiller Daytona, clear in 31.09, while junior rider, Alex Finney and the Gerry Marron owned Absolutely Kingmar Z, took fifth when clear in 31.34. A clear in 31.56 ensured Sam EI Dahan and WKD Valencia sixth place