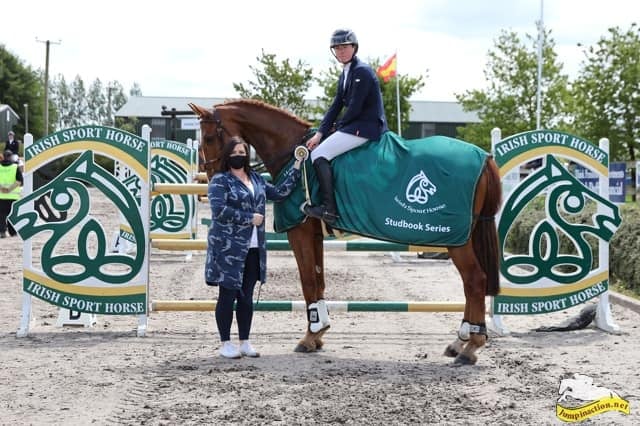 Posted at 09:25h in Uncategorized by Emer Bermingham
Share

Leinster riders continue to clock up results in the ISH Studbook Series with Athlone’s Francis Derwin claiming victory in the seven-year-old final on Friday (4th June).Riding Florida Springs, he was the fastest of five double clears in 38.33 seconds. Placed second in the round at Cavan, this pairing has certainly made their presence felt in this series. Bred by Patrick Smith, the mare is by Mermus R out of Rockville Star (Kings Master), and is owned by Francis Derwin Snr.  Not content with the win, Francis Derwin also took fourth place with Fernhill Balou Beau, when they delivered another clear, albeit in a slower time of 39.47. Bred by Donald Clarke from Sligo, the gelding is by Sligo Candy Boy out of Miss Mac Car.
In the six-year-old division, Claiming victory  was Ethen Ahearne and Lissadell,  when clear in 27.92. This combination impressed in the first RDS qualifier when claiming victory. Bred by Kildare breeder Noel Cawley, the mare is by Plot Blue and the dam, Winter Cruise. Kilkenny rider   Jack Brennan,  delivered a clear in 32.37 with the Sinead Brennan owned MHS Style for third place. Bred by the late Ita Brennan, the mare is by Kannan.County Meath’s Nicholas Butler slotted into fifth place with his own Nala NBS when clear in 33.61. Sixth place belonged to Kilkenny’s  Adam Carey when he finished on four faults in 30.11 aboard  Luis Cruz.

In the five-year-old final, four combinations jumped double clear to split the win. Amongst the winners was Kildare’s Stephen Murphy with  She’s Got It. Also in the line up was Quinn McIlhinney riding the Ronan Rothwell owned and bred Boleybawn Evie,