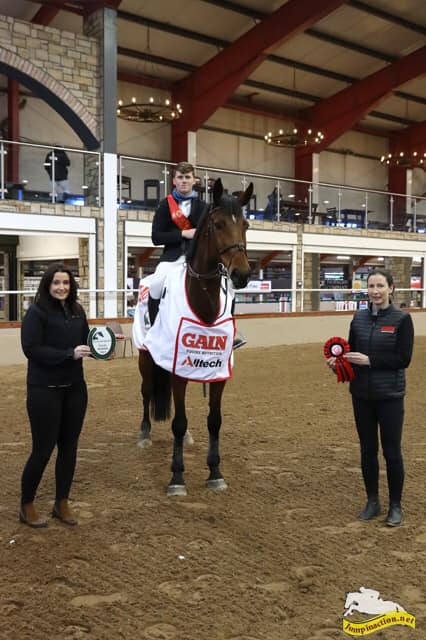 16 May Win for Kildare’s Sean Monaghan in Cavan

Posted at 22:44h in Uncategorized by Emer Bermingham
Share

Kildare’s Sean Monaghan put his first points on the GAIN | Alltech National Grand Prix leaderboard today (16th May) when he rode to victory in the round at Cavan Equestrian Centre. Riding Daisy Duggan’s EMS Adelaide, he was the fastest of 13 double clears in a time of 41.63 seconds. It was a good weekend for this paring as they also took sixth place on Friday in the 1.30m.

Bred by Willie McElhinney, the eight-year-old mare is by Mermus R and out of the Loch Cruise sired dam, Sante Cruise. Last year, the combination had much success in the seven-year-old ISH classes and this year the mare began her season with her owner, before Monaghan took of the reins again in April.
As expected, there was a good turn out with 77 combinations going to post, of those 23 booked their place over the Stuart Clarke jump-off course.

Monaghan put in a blistering round, so much so, that his closest rival, Emma McEntee was almost five seconds slower with the Miguel Bravo owned MHS New York in a time of 46.10. McEntee is no stranger to this type of pressure having just been crowned the TRM Showjumpers Club Champion. Owned by Miguel Bravo and bred by Thomas Brennan, MHS New York is an eight-year-old gelding by Quidam Junior and out of the Cavalier Royale sired dam, Cavalier Kells.

Ethen Ahearne, who had been placed in the earlier ISH Studbook series was back in the line-up, taking third place in this class. Riding Julia Nagler’s Clark, he clocked 46.36 for third place. Bred by Bettina Willenbockel, this eight-year-old German bred gelding is by Codex one and of St Pr Hauptstutbuch Sassicaia.

Winners of the opening round in Coilog, John Floody and Accidental Diamond added another six points to their tally, when they delivered a clear in 47.45 for eventual fourth. This result keeps Floody on the top end of the leaderboard. Owned by Kathryn Magennis and bred by John Kearny, Accidental Diamond is a nine-year-old gelding by Diamond Roller and out of the High Roller sired dam, Cottage Donna.

Olive Clarke and Clonguish Vivaro slotted into fifth, when they crossed the line in 47.85. Owned by Bernard Jordan, the 12-year-old gelding is by Vivaldo Van Het Costersveild and out of Clonguish Gold

SJI Autumn Grand Prix Champion John McEntee added to the family’s haul when he took sixth place with HHS Vancouver, stopping the clock in 48.61 seconds. Bred and owned by Marion Hughes, HHS Vancouver (ISH) is an eight-year-old gelding by Indoctro and out of the Don Juan De La Bouverie sired La Juanita. Prior to McEntee taking over the ride, the gelding was campaigned with much success by Mikey Pender.