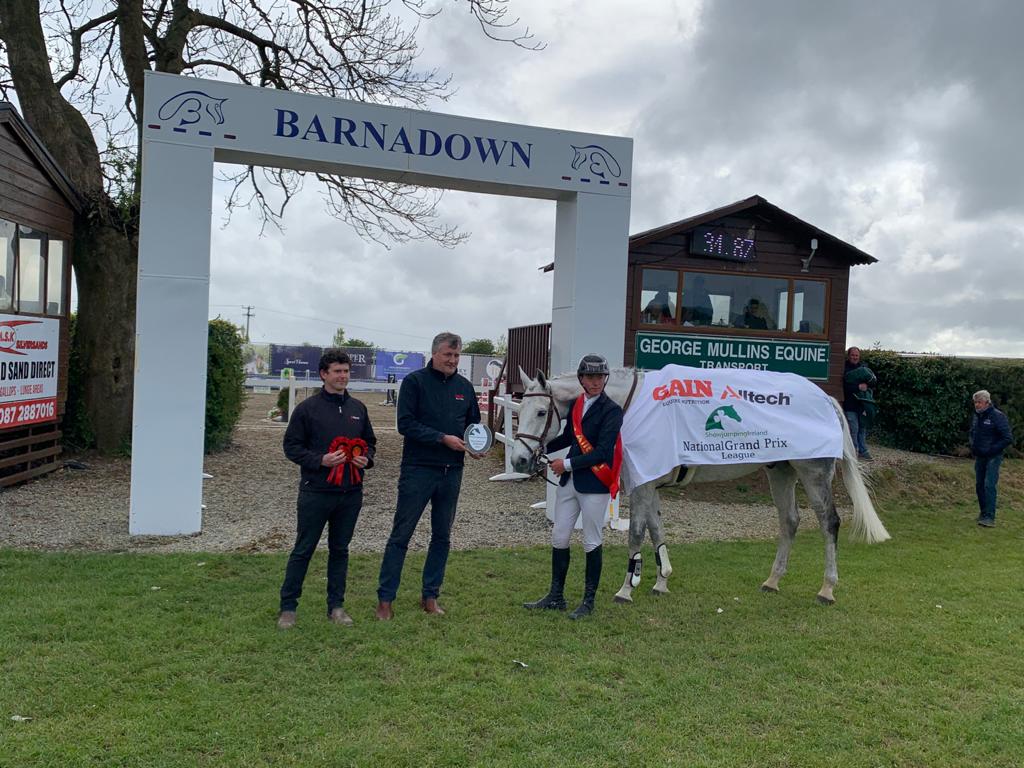 Francis Derwin and AHG Whiterock came out on top in today (8 th May) GAIN
Alltech Grand Prix in Barnadown showjumping in County Wexford. Second to go in a strong
jump-off, the pairing made it look easy as they delivered a clear in 31.69, to take the lion’s
share of the €4,000 in the Cooley Farms sponsored round.
AHG Whiterock Cruise Down, who is owned by Francis Derwin has no shortage of
experience, with a host of wins under the 12-year-old’s belt. Amongst his accolades was
being Kate Derwin 2019 European Junior gold medal mount. The gelding is by Cruisings
Micky Finn out of the Touch down sired dam, Whiterock Touch.
In total, 77 combinations contested this round, and from those, 13 clears delivered clears
first time out. Of those in the top six line-up, three horses were just eight-year-olds,
demonstrating the rising talent competing on the national grand prix circuit.
The runner-up spot was filled by the Autumn Grand Prix Champion, John McEntee and Hip
Girl, who also kept the poles in place, albeit in a slower time of 34.63. Owned by Stephex
Stables, Hip Girl is a 12 -year-old Swedish Warmblood mare. Bred by Tarno Sateri och
Sigane, she is by Hip Hop and out of the Carthago sired dam, Mysterious Girl 2.
Filling third place on this occasion was Dean Rogan, who was riding the Declan McGarry
own De L’ Oiseliere (Kapitol D’ Argonne x Miss Flight). Going mid-way in the jump-off, they
delivered a clear in 34.87.
A clear in 35.33 for Kevin Gallagher and ESI Star Struck saw them take fourth place in the
line-up. Owned by GBBS LTD & Ennisnag Stud, the 10 -year-old gelding is by Lamm De
Fetan and out of Halona De La Vie.
Clem Mc McMahon also crossed the line with nothing to add aboard the Hilton Farm and
John Connolly owned TJM Amour Fou (Diamant De Semilly x Catani Z) in 38.13 for fifth place.
Completing the top six line-up was last week’s Grand Prix winner Tim MacDonagh. On this
occasion, the Galway rider took it on with his own Hollypark Pacino (Pacino x Hollypark).
The Current National Grand Prix Champion, Kildare rider Derek McConnell and Dothraki Warlord
(Mermus R x Tiamo Diamant were last of the double clears in 39.39 for seventh place.