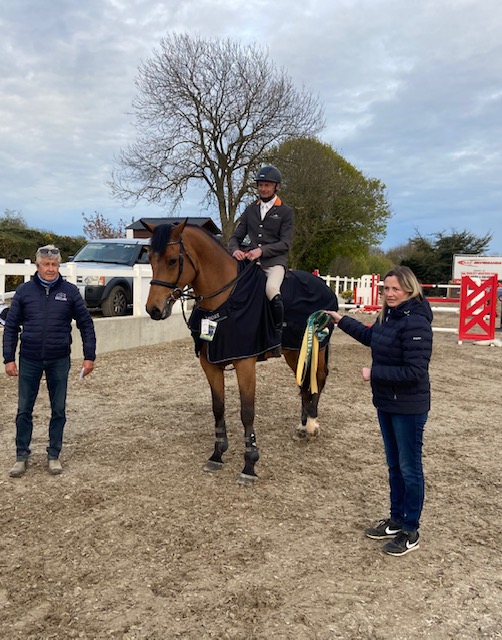 07 May Francis Connors victorious in Barnadown

Francis Connors takes the opening win in the Mervue Equine Leinster Summer Tour
Waterford’s Francis Connor’s has dominated the first round of the 1.35m Mervue Equine
Leinster tour today in Barnadown, claiming first and second place in what was a very
competitive class. Early to go in the class, Connors delivered a clear with Luxtapose, in a
time of 32.98 seconds to take the winners share of the €2,000 on offer. Returning with
Rossa Lough Derg, he was almost four seconds slower when clocking 36.44, but this would
see him take the runner-up spot. Owned by Miley Dunning, Luxapose is a ten-year-old
gelding by Lux Z and out of the Cruising sired dam, Coosan Lass. Owned by Cathal
Mcmunn and Carole Reape and bred by Eamonn Hogan, Rossa Lough Derg is an eight-
year-old mare by Luidam and out of Cruising Lough Derg.

There was a great turn-out for the class, with 85 combinations batting it out, of those 21
delivered double clears.
Little divided the next placing as Jason Foley partnered Julian Pearson’s Killossery
Krescendo to a clear in 36.45 seconds. Another eight-year-old, he was bred by Frank and
Laura Glynn and is by Indoctro out of Killossery Kruisette.
Slotting into fourth place was Jenny Rankin on the Vanessa Mannix owned Hey Jude, clear
in 36.70. This Belgian bred gelding is by Ugano Sitte and is out of Athena van de
Donkhoeve.
A clear from Madeline Roberts Allen and her own Celah Sue De Rialfo Z in 36.89 seconds
proved good enough for fifth place. Another Belgian bred, the mare is by Coupe De Coeur
and out of Olala
Completing the top six line-up was Wicklow’s Brendan Murphy and PNP Rocco, when they
crossed the line in 38.06. Owned by Ashley Stephens, the gelding is by Chacoa Scoole Hill
Clover.