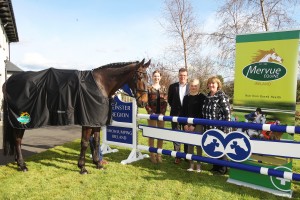 The third round of the Mervue Equine Leinster Summer Tour at the Flavours of Fingal/Fingal Harriers Horse Show, saw over 150 combinations battle it out over the three sections. This round of the league was sponsored by Joe Duffy BMW Motors.

On Saturday, just three riders proceeded to the jump-off in the 1.35m division. In the end, victory belonged to Sophie Richards, who recorded a single time fault with Grandi JE O. Stacey Babes recorded two time faults with BP Castlefield, for second place. Babes also took third with Kelly. De Regor, when incurring three time penalties. Thomas Foley and Kingsborough Verdiva, proved fastest of the four faulters in the first round in 69.07 for eventual fourth, ahead of Frank Curran and Olivier Twister, who incurred four faults, in a time of 74.10. Philip Mcguane and Cavalor, also crossed the line with four faults in 74.28 for sixth place.The leading pro am of this round was Aoife Healion, while Thomas Foley was the leading young rider.

Leading the victory lap in the 1.10m class was Andrew Byrne and Hunter’s Lodge Puissance, when clear in 24.69 seconds. Along with the win, Byrne was also named as the leading pro am of the round. Jamie Lander and Castleforbes Victoria, crossed the line, clear in 24.73 for second, ahead of Laura Carrick and My Fox Lass, who delivered a clear in 24.86 for third. Helen Dempsey and Captain Malibu, clocked 25.74 for fourth, ahead of Amy Slattery and Ban du Carmel, clear in 25.85. Slattery also took the leading young rider prize of the round. Sixth placed was occupied by Shaunagh Thomson and Garrison OBOS, clear in 26.50.

Gavin Smith took the win in the 1.20m division, when he partnered Mullinroe, to a clear 33.32. Smith also took home the leading young rider prize for his efforts. Taking the runner-up spot was Kirsten Fynes and Oscars Peaches, who was fractions behind in 33.61. Abigail Stanford and MJM Vanity Fair’s clear in 35.34, saw them take third. Rebecca McGoldrick’s and Loughview Black Diamond footperfect performance in 35.76 secured her fourth place, ahead of Emer Kavanagh and Boswell MR Heart Breaker, in 36.26. Andrew Byrne and Hunters Lodge Puissance also featured in this line-up, taking sixth place, and with it the leading pro am prize, when clear in 34.87.