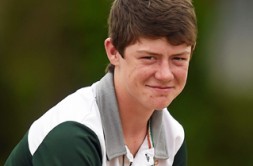 In an incredible result for Irish Equestrian Sport and Irish Breeding, 16-year-old Michael Pender has won both the Silver and Bronze medals today in the five-year-old final at the World Breeding Jumping Championships at Lanaken in Belgium – with both medals claimed aboard Irish Sport Horses. Pender from Co Kildare, who is a student at Knockbeg College in Carlow, took on some of the world’s most experienced riders in what is one of the most prestigious competitions on the world Show Jumping calendar. A massive 229 horses and riders started in the five-year-old competition alone, with Ireland qualifying five combinations for today’s final.

Pender was double-handed in the decider and took the early lead in the 20 horse jump-off with the mare Z Seven Canya Dance (ISH), who was bred by Anne Hughes from Co Kilkenny. Incredibly Pender then beat his own target time with his second mare, Z Seven Caretina, who was also bred by the Hughes family’s Marion Hughes – herself a former Olympian.

Second last to go, Tipperary’s Darragh Ryan almost made it onto the podium with Lackamore Storm (ISH) who was bred by Ian Heslin in Co Longford. They knocked just the very last fence but would still hold on for a top 10 finish taking ninth place overall.