Ireland were tied for the lead with Belgium on a zero score at the halfway stage following clear rounds from Duffy riding Felix, Garrigan with Contino and O’Reilly Hyland with Ahmed Du Calvaire. The second round saw Ireland add just five faults to their total. Duffy came home with just a time fault, while Garrigan lowered a single fence. Ireland’s last rider, Gavin Harley with Understone Van de Kapel, delivered a perfect clear to seal the gold medal for Ireland. The Netherlands took the Silver medal with Switzerland claiming Bronze.

Chef d’Equipe, Comdt. John Ledingham said:
“We are absolutely thrilled. We have won many underage medals over the years but this is in fact our first Young Rider team gold. There was an incredibly strong line-up of Europe’s top teams here in Millstreet and to come away with the Gold is a fantastic achievement. A huge amount of credit must go to the riders, their parents and the owners who put their horses forward to represent Ireland. One of these owners, Stanny Van Paesschen from The Netherlands, has been a huge supporter of Irish Show Jumping over the years and he along with all our owners have shown enormous generosity.” 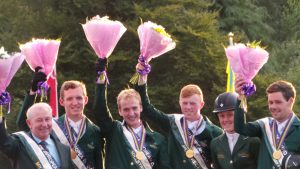 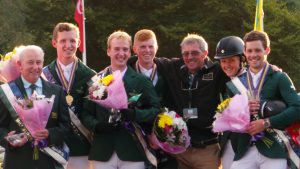 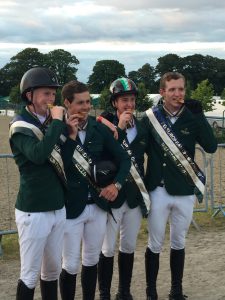