Pure class from Allen – what a combination?

10 Jul Pure class from Allen – what a combination? 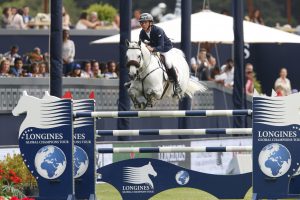 A thrilling contest saw seven combinations jump clear over the first two rounds, with a third round jump-off against the clock deciding the final prizes. Allen and the nine-year-old Hector, who was one of the youngest horses in the competition, produced a third spectacular clear (one of just three in the contest) to finish just over a second behind Italian winner Piergiorgio Bucci and Casallo Z.

Allen and Hector van d”Abdijhoeve, who is owned by Noel Delahunty’s Connaught Bloodstock, had finished one spot outside the podium places in the Madrid Global Tour in May and their third place finish in Estoril netted the pair €45,000.