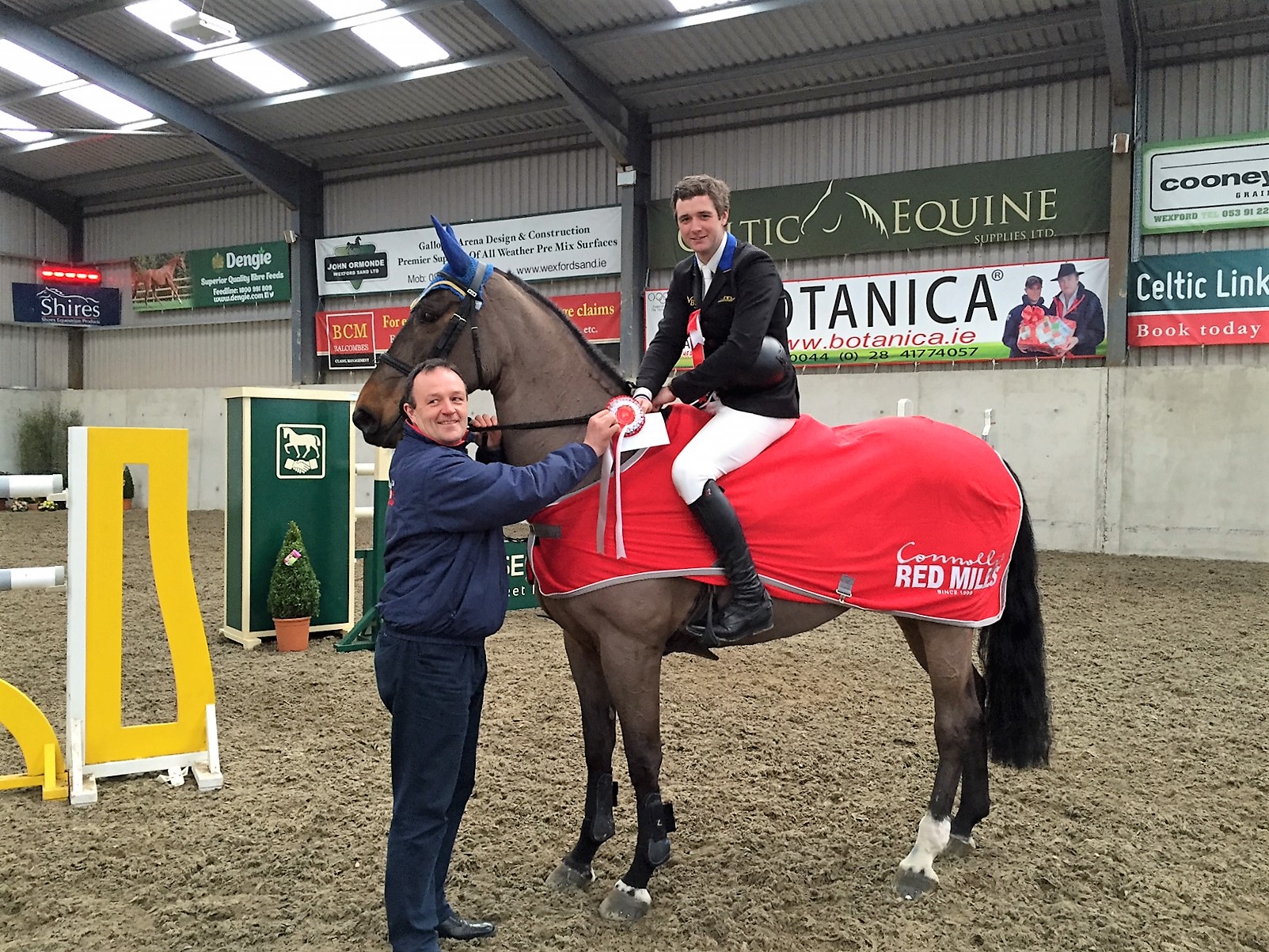 “Kilkenny native, Vincent Byrne proved popular with the home crowds last Sunday as he piloted Mr Rockefeller to victory in the second round of Horseware TRM/Grand Prix league at his local show at Thomastown.   Full of praise for Mr Rockefeller, Byrne said; “He is a very quick horse across the ground and he takes the turns easily. The ground here today was spot on and the course really suited him as there was a good few turns back to verticals which he handles very well. It was always going to be a competitive class and I knew that from looking at the start-list. Ger put it up to us when he got three through to the jump-off and really to win you needed to be very fast”   Owned by James Weldon, Mr Rockefeller is a 12 year-old gelding by Ard VDL Douglas out of a King’s Servant mare, Kings Aire. This is the second local win for combination of late having won the penultimate leg of the Connolly’s Spring Tour at Warrington last month.

As expected there was a large contingent of experienced local riders contesting this round and as a result, the 13 combinations that proceeded to the jump-off only had a win in mind.   Triple handed in the jump-off, Ger O’ Neill was first to take on the Pat Drennan designed course. First to go with Jonathan Andrew’s Hurricane, O’Neill put it up to the rest when he delivered a clear in 42.84 seconds, which later saw him claim fifth place.   Galway’s Martin Hynes also kept everything in place with the first of his two mounts Galway Brigade, albeit in a slower time 45.02 for eventual sixth place.   No stranger to pressure, Meath rider Gerard Clarke set off in a blistering pace with Kellswater Crimson and a series of tight lines saw him cross the line almost three seconds faster in 39.94 to take the lead.   Returning with Dondoctro Ryal K, Ger O’ Neill knew what he had to do to be in with a chance.

Throwing caution to the wind he kept the pace up throughout the course, but despite this good attempt a clear in 41.19 seconds saw him fill third place in the final line-up.   Both Francis Connors (Erne Ladygoldilocks) and Paul Beecher (Ikona V.’T Recht Eind) delivered clear rounds. Connors round in 45.51 saw him finish in seventh place, just ahead of Beecher who clocked 52.54.   Going late in the draw, all eyes were on Vincent Byrne and Mr Rockefeller.  Cheered on by spectators, the combination made up time from the start and a series of tight turns saw them set the winning time of 38.20 seconds and in the process demoting Clarke into second.   The penultimate combination, Martin Hynes and Rockhill Harlequin once again answered all the questions, but in a faster time of 42.56 for eventual fourth place.   Last to go, Ger’ O Neill had one last chance to take the lead. Riding Dree Boeken’s Grossos Roeschen he proved out of luck when faulting early in the round and his time of 43.71, saw him finish outside the top six.