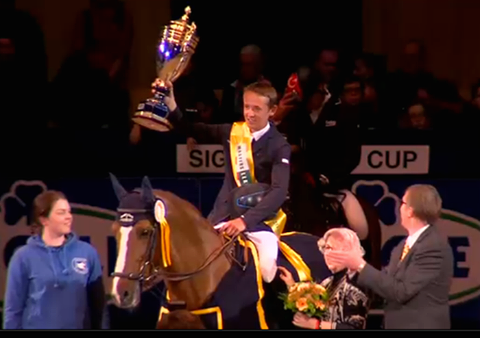 IRELAND’S  Bertram Allen put in a stunning round of speed and jumping with Quiet Easy to snatch a dramatic victory in last night’s (Friday) $130,000 speed challenge at the Longines World Masters show in Los Angeles.
In a contest which featured 33 international riders, world number one Scott Brash of Great Britain was holding what seemed an unassailable lead with Hello Annie, until Allen swooped at the death to claim the honours by going clear in a time which pipped Brash by 0.05 of a second.
Allen drew gasps from the crowd at the second last obstacle when it looked like an exceptionally tight turn might have given him too much to do, but the Wexford rider and Quiet Easy made the jump and went on to clear the last and post the winning time.
Third place went to Italy’s Piergiorgio Bucci on Cuarta, who were a full four seconds behind the leading two places.
The win netted the Irish rider a first prize of $42,9000.
ends