Gold Medalist, Jenny Kuehnle adds another victory to her list. She is the 2015 PegusLST(1.35) Winner on Chatanya

08 Sep Gold Medalist, Jenny Kuehnle adds another victory to her list. She is the 2015 PegusLST(1.35) Winner on Chatanya 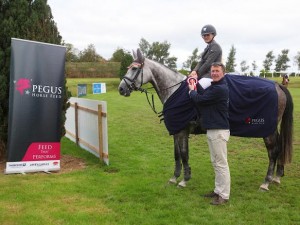 Thirteen-year-old Kuehnle has enjoyed a phenomenal few weeks, winning the
148cms pony championship at the Dublin horse show at the RDS, before she
was crowned European children on horses (under 14) champion, after a gold
medal winning performance in Austria.

The Laois-based teenager added the Pegus LST title to her incredible list
of achievements, finishing as the overall league-winner as the most
consistent performer over the course of the series with Chaitanya 2.
Kuehnle also collected the added bonus of leading young rider and claims a
fantastic prize of a week’s training with Olympic bronze medallist Cian
O’Connor at his base in Karlswood Stables. 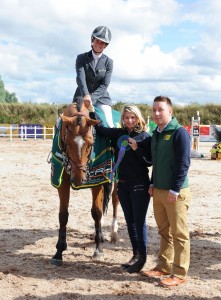 James Hogg took third place overall.
On behalf of the Leinster Region of Showjumping and Pegus Horse Feed, we wish to congratulate the winner of the Tour Jennifer Kuehnle, Runner Up, Nicola Fitzgibbons and 3rd Place, James Hogg on their success in the Tour.
We also wish to thank the riders, their owners for their support and look forward to 2015 Season.
A Big thank you to both Sponsors – Pegus Horse Feed and Leinster Region of Showjumping.
—————————————