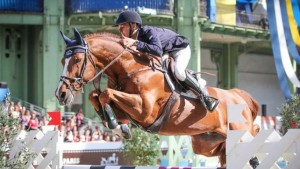 IRELAND’S 19 year-old Bertram Allen notched up his third victory at the five-star show in La Baule this afternoon (Saturday) with a win in the big Derby class.

The Wexford teenager took on a world-class field on the renowned French derby course, a difficult mixture of cross country obstacles such as ditches and banks together with traditional show jumping fences.

Allen, riding the bay mare Wild Thing L, took the lead from just over half way down the startlist with four faults on his card and a finishing time of 141.23 seconds. British star William Whitaker on Glenavadra Brilliant jumped five places later, and though also incurring four faults, was way down on speed, stopping the clock a considerable 15 seconds behind Allen to finish as runner-up.

World number three rider, Switzerland’s Steve Guerdat with Nasa, was the only other rider to come home with four faults, but was 22 seconds behind the Irish leader and settled for third place.

Allen, who picked up 15,000 euro in prize money for his win, added the Derby trophy to his two other victories at La Baule –Friday’s Prix Générali speed class, also with Wild Thing L, and Thursday’s feature competition on board the 17 year-old Romanov.

Meanwhile Cork’s Billy Twomey, who is joint owner of Wild Thing L with Ballywalter Farms and owner of Romanov, celebrated his own victory at the Royal Windsor Horse Show in England with a Friday night win on Joe Flynn’s Ardcolum Duke (ISH)(TIH) in the Bahrain Pearl Stakes jump-off class, which netted him 7,000 euro in prize money.