Bertram does it again in Madrid

04 May Bertram does it again in Madrid 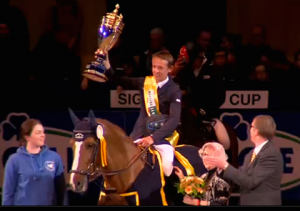 NINETEEN year-old Bertram Allen chalked up yet another honour for Ireland today (Friday) when he outclassed a 55-strong international field to win this evening’s feature speed class at the five-star show in Madrid.

Allen collected just over 8,000 euro for his win, while the 52 year-old Swiss veteran earned 5,000 euro for his runner-up place. World number three, Germany’s Ludger Beerbaum, settled for third place against the Irish teenager, trailing behind by almost six seconds on the grey mare Chiara.