What a Champ! Bertram Allen at his best

17 Apr What a Champ! Bertram Allen at his best 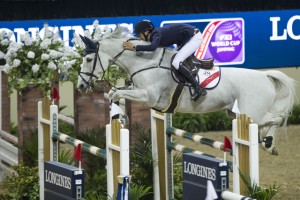 A spectacular performance from 19-year-old Bertram Allen and the grey mare Molly Malone, saw them win the first leg of the Longines FEI World Cup™ Jumping  Final in Las Vegas, USA this morning (Friday) after a blistering fast clear-round of 65.45 seconds.

Drawn number 32 to jump in the opening speed competition, Wexford born Allen shaved a second off the target time of the then joint-leaders Patrice Delaveau from France and The Netherlands’ Jur Vrieling.

Bertram Allen’s now goes forward to Saturday morning’s two-round second leg, before Sunday’s third competition which could see the 19-year-old become the youngest World Cup Final winner in 30 years, and the first ever Irish rider ever to win the trophy.